As Paris Region sets to further advance the production and use of renewable, local energy, the energy industry as a whole pushes forward to offer clean, sustainable alternatives to the Region's residents, and tomorrow, to the rest of France. With a rapidly growing population and changing consumption habits, the Region is a great environment for innovative companies with solutions in the clean energy space. To find more resources, browse our downloadable guides.

Discover our current calls for applications
Subscribe to the Cleantech newsletter 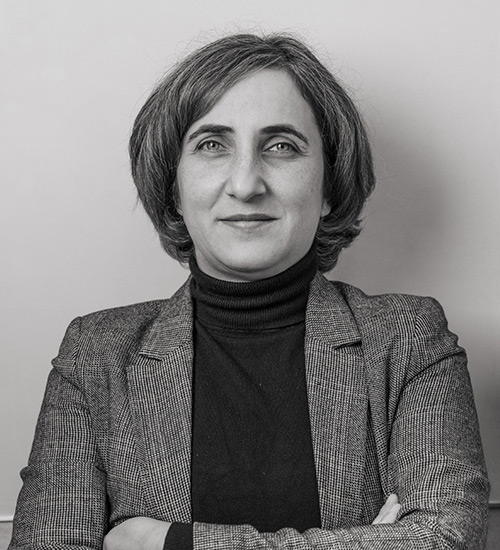 A Few Facts About the French Electricity Market Today

With sustainability in mind, Paris Region seeks to drastically reduce its reliance on fossil fuels and nuclear power. By 2030, Paris Region will aim to:

This ambitious plan will be backed by a €46-million investment plan from the Region to encourage the use of energy that is renewable and local.

Paris Region also designed a plan supporting the local production of a substantial part of the energy it needs on a yearly average. The following investments will allow the production of 37 TWh, out of the total 225TWh the Region consumed in 2015 for example:

At the end of 2018, the solar park installed in the Region reached 100 MW. However, the regional potential identified is 6 GW, which represents 60 sqm of photovoltaic panels. Such production would cover the electricity consumption of about 1 million people.

Paris Region counts about twenty household waste treatment plants. A late 2018 European directive now requires them to recover energy from incineration in the form of electricity and heat. These existing technologies are expected to keep getting modernized as innovations roll out.

Paris Region is currently home to 30 methanization units. The estimated biomethane to be produced by 2030 could represent the equivalent of up to 240 installations.

With 45 facilities, Paris Region is the #1 Region in Europe for its number of production plants which supply heating networks. 20 new deep geothermal boreholes are planned for construction by 2030.

Today, there are no more than thirty wind turbines in the Paris Region. It was estimated that by 2030, the Region has the potential to deploy about 300 wind turbines spread out over 40 wind farms.

A Market Stimulated by Societal Change

The development of renewable energies is not only encouraged by public policies but also by societal and market changes such as the growing use of electric vehicles. As forecasts predict that the Region’s population will steadily increase (and count +300,000 inhabitants by 2025), it is expected that new energy needs will emerge in the coming years. The development of new ambitious transport projects will be part of that growing need for reliable, sustainable, and locally produced energy.

The Smart grids market in France is expected to weigh €1.2 billion by 2021. For companies able to bring innovative offers to the energy or digital markets, in the field of electrical infrastructure (equipment, sensors, power lines, meters, etc.), or software (network management and optimization thanks to Data) or even data security, there are tremendous business opportunities to seize in Paris Region.

As 8% of France's total population live in Paris Region, which produces 30% of France’s GDP and requires 15% of the country’s electricity consumption, Paris Region offers an excellent environment for experimental projects. Companies testing and deploying innovative energy solutions can also rely on a strong functional mix, increasing the possibilities of energy pooling.

Clusters, Incubators and Accelerators to Support Your Growth in Paris Region

NextMove is a Mobility and Automotive R&D competitiveness hub focused on electric vehicles, smart grid/charging station infrastructure and ICT for mobility. The cluster is fostering the development of collaborative projects between members, the development of companies in the industry, in particular SMEs, and the promotion of innovation across the board. Learn More.

Systematic Paris Region focuses on digital B2B complex systems and has a strong expertise in Smart City Management. Since its creation in 2005, it has been engaging a community of about 900 members, which includes 600 startups and SMEs, 140 corporate groups, 140 academic members, investors and local governments. Learn More.

Cap Digital Paris Region is The French Hub for digital & ecological transformation. The cluster covers 6 major fields of activity including Sustainable Cities. This sector brings together all innovations from ecologic transition to digital transformation and urbanism that have been implemented in experimental territories. The cluster works with its 1000+ members (including VSEs/SMEs, major groups, research and training organizations and venture capitalists) to help them find the support, connections and financing they need for their innovative projects. Learn More.

CSTB’Lab - The Scientific and Technical Center for Building (CSTB) is a public organization whose main mission is to promote innovation in the construction industry. The CSTB'Lab is an accelerator encouraging the development of new products and services in response to the main scientific and technical challenges of energy, environmental performance, health and accessibility. Learn More.

i-Lab is Air Liquide’s innovation laboratory. It aims to explore new markets through a user-centric approach so as to detect, test and accelerate new growth opportunities for the Group. Their innovation strategy focuses on three major trends: energy transition, healthcare and digital transformation. Air Liquide is a leader in the global Hydrogen Energy economy. Learn More.

Agoranov is a public Science & Tech incubator with very strong expertise on life sciences, engineering, energy and digital. The incubator provides individual coaching, acceleration programs, all-inclusive accommodation in Paris and access to a large network. The incubator can count on its ecosystem expertise and a label based on 17 years of expertise. So far, the projects incubated by Agoranov led to the creation of more than 330 companies and 7,000 jobs. It also helped its partners raise more than 700 million euros in private funds. Learn More.

Greentech Verte initiative was launched in 2016 by the French Ministry for an Ecological and Solidary Transition. It aims to support innovators who desire to spark positive social and environmental changes and are motivated to implement the Ministry’s policies. Learn More.

Hydrogen Club of Paris Region is a joint initiative set up by the local authority, in partnership with ADEME (French Environment and Energy Management Agency), France Hydrogen Association and Paris Regional Energy & Climate Agency (AREC). This Club aims to accelerate the deployment of hydrogen projects on the territory in relation to the local and renewable hydrogen production, the distribution of hydrogen for vehicles, and the general accessibility of hydrogen. Learn More.

Leonard is an innovation entity initiated by VINCI, a major player in construction and concession agreement industries. VINCI designs, finances, builds, and manages infrastructures and facilities. The Leonard platform explores foresight scenarios for towns and infrastructures of the future. Learn More.

EVOLEN’UP is an accelerator in the energy sector launched in 2019 by EVOLEN, whose mission is to research and support new solutions to address current energy challenges. It intends to make affordable, reliable and clean energy - a vector of progress - available to as many people as possible, in the safest way possible. Learn More.

The Smart Energy Alliance brings together 11 French competitiveness clusters, involved in the energy, digital and mobility fields, to meet the challenges of the energy transition and the digital transformation. The Smart Energy Alliance counts 2,200 stakeholders, including 1,500 SMEs, and more than 2,500 projects, for an overall budget of 9 billion euros. 3 Paris Region clusters are in the alliance: Systematic, Mov’eo and Cap Digital. Learn More.

Think Smartgrids, is the national association promoting Smart Grids in France and around the world. Through its actions and the support it provides, the association hopes to create 20,000 jobs in France by 2020. With revenue of 6 billion Euros, 50% of which will come from exports, the global market is estimated to be worth 60 billion Euros. Learn More.

Energy Time Paris, Paris, November, is the annual event for energy management and new technologies and services dedicated to performance. The Energy Time exhibition allows you to meet all the energy managers of companies and communities wishing to create an economical and sustainable future in their organization. Learn More.

Smartgrid & Smartcity, Paris, March, is a 2-day event designed for companies, local and regional decision-makers. Its mission is to help them identify new technologies and sustainable, connected smart cities solutions available for buildings, cities, and territories. It is an opportunity to discuss the issues and challenges faced by cities through with testimonials (from companies, local and regional decision-makers), conferences, debates, and workshops based on practical cases. Learn More. 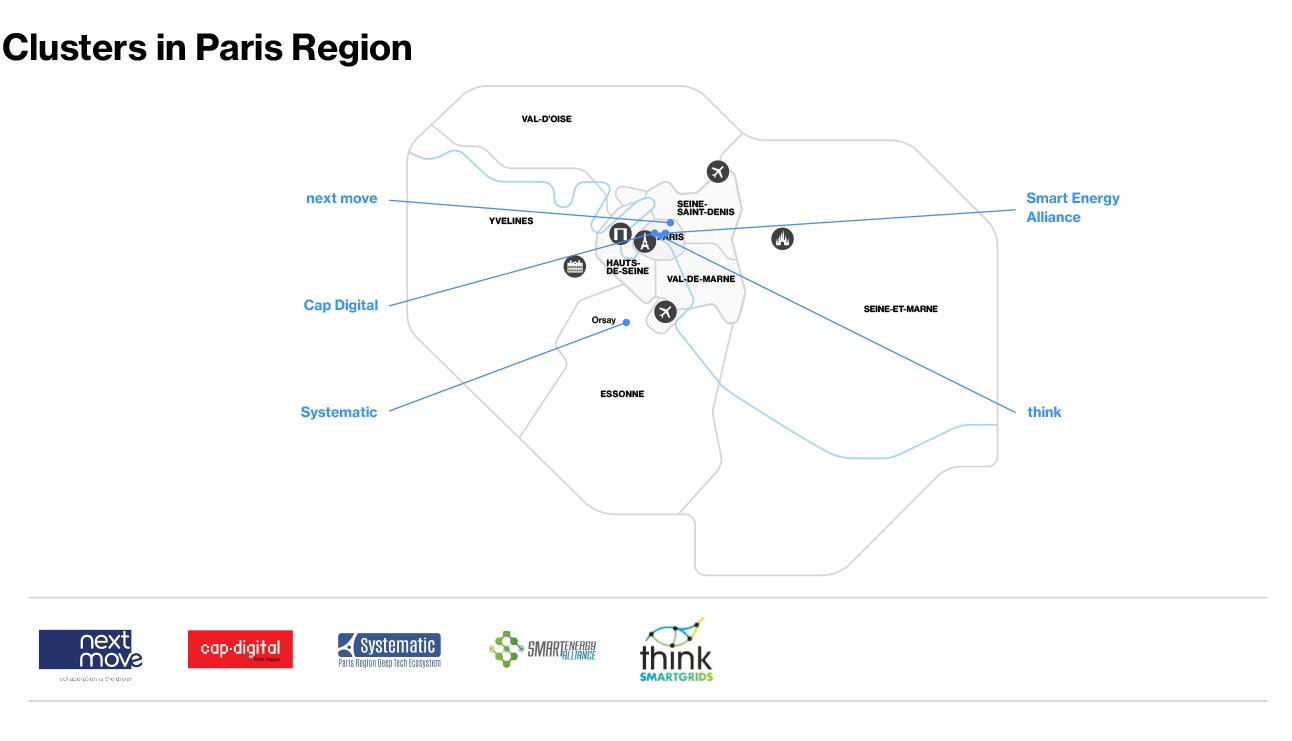 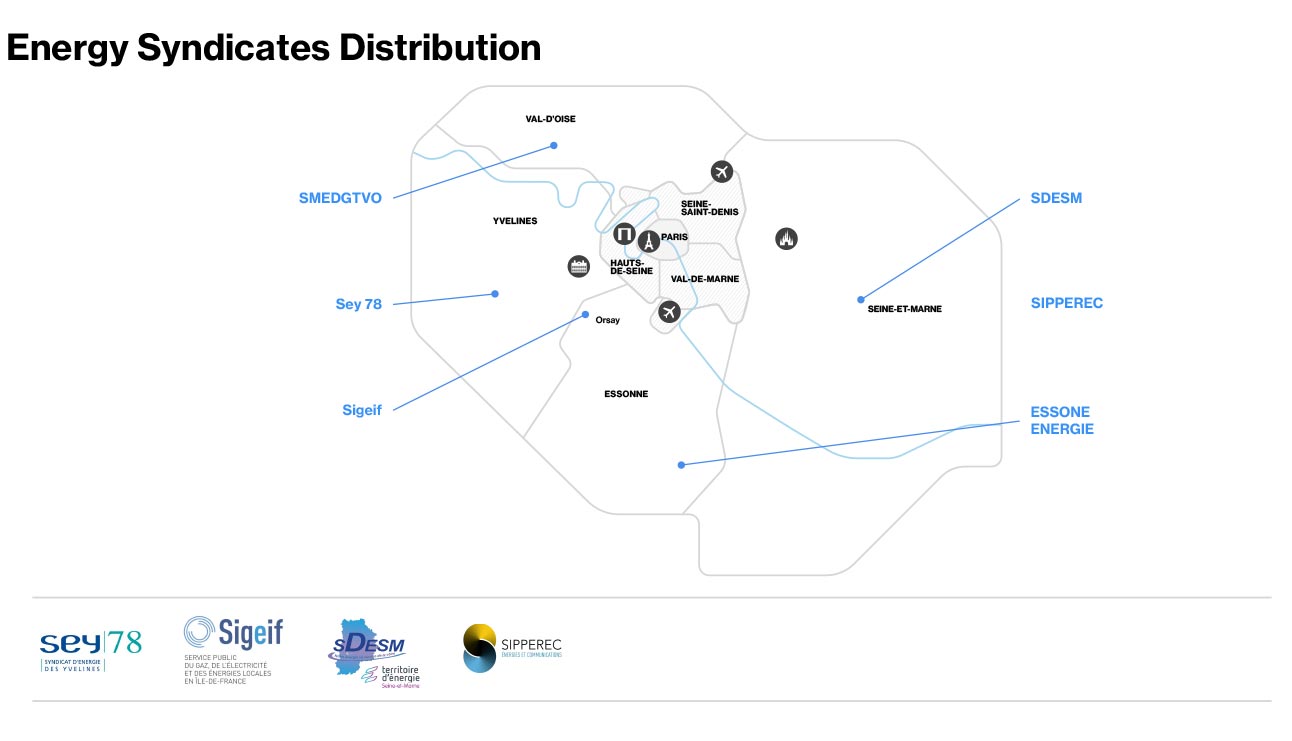 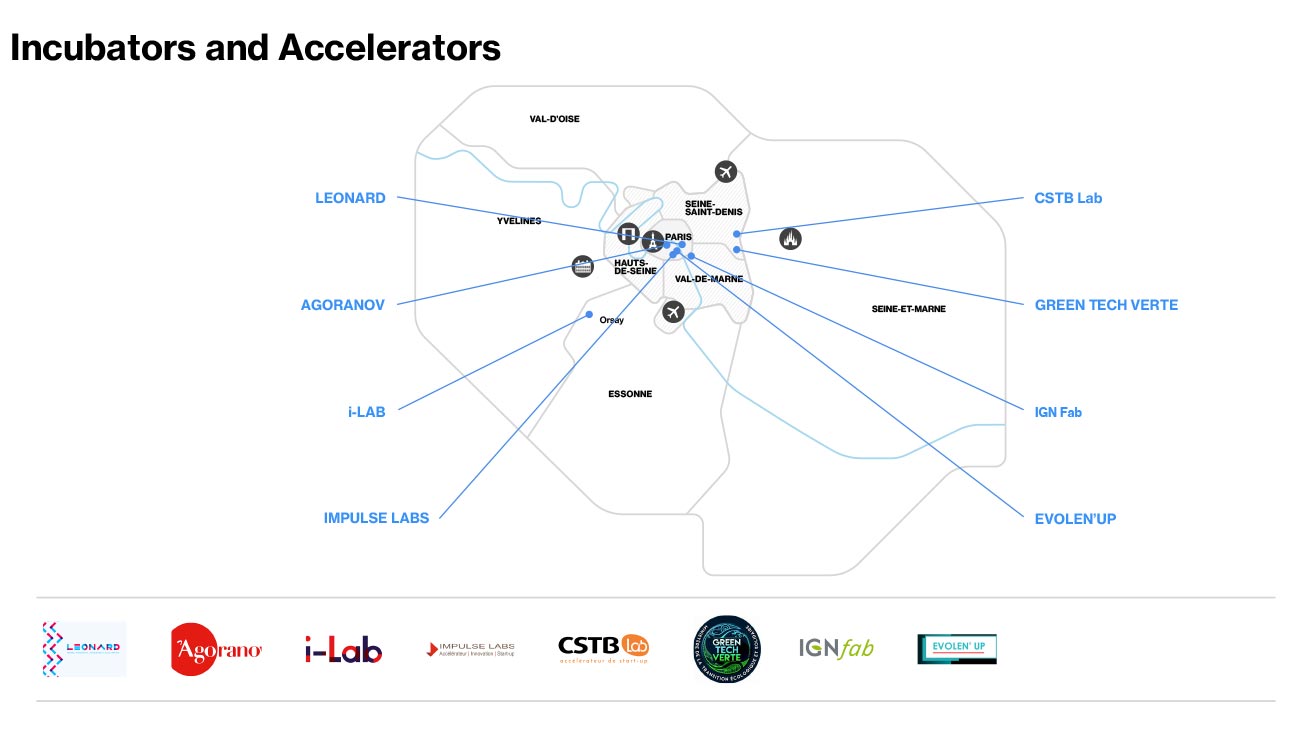 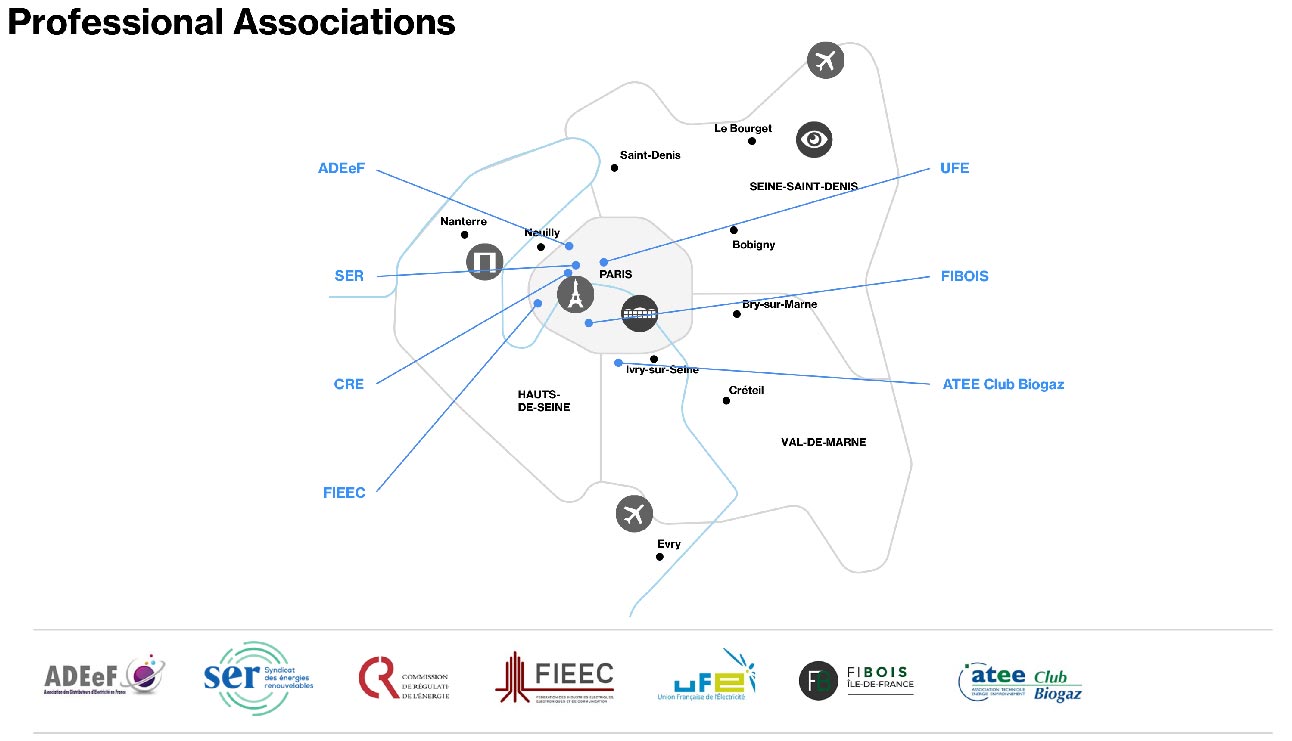