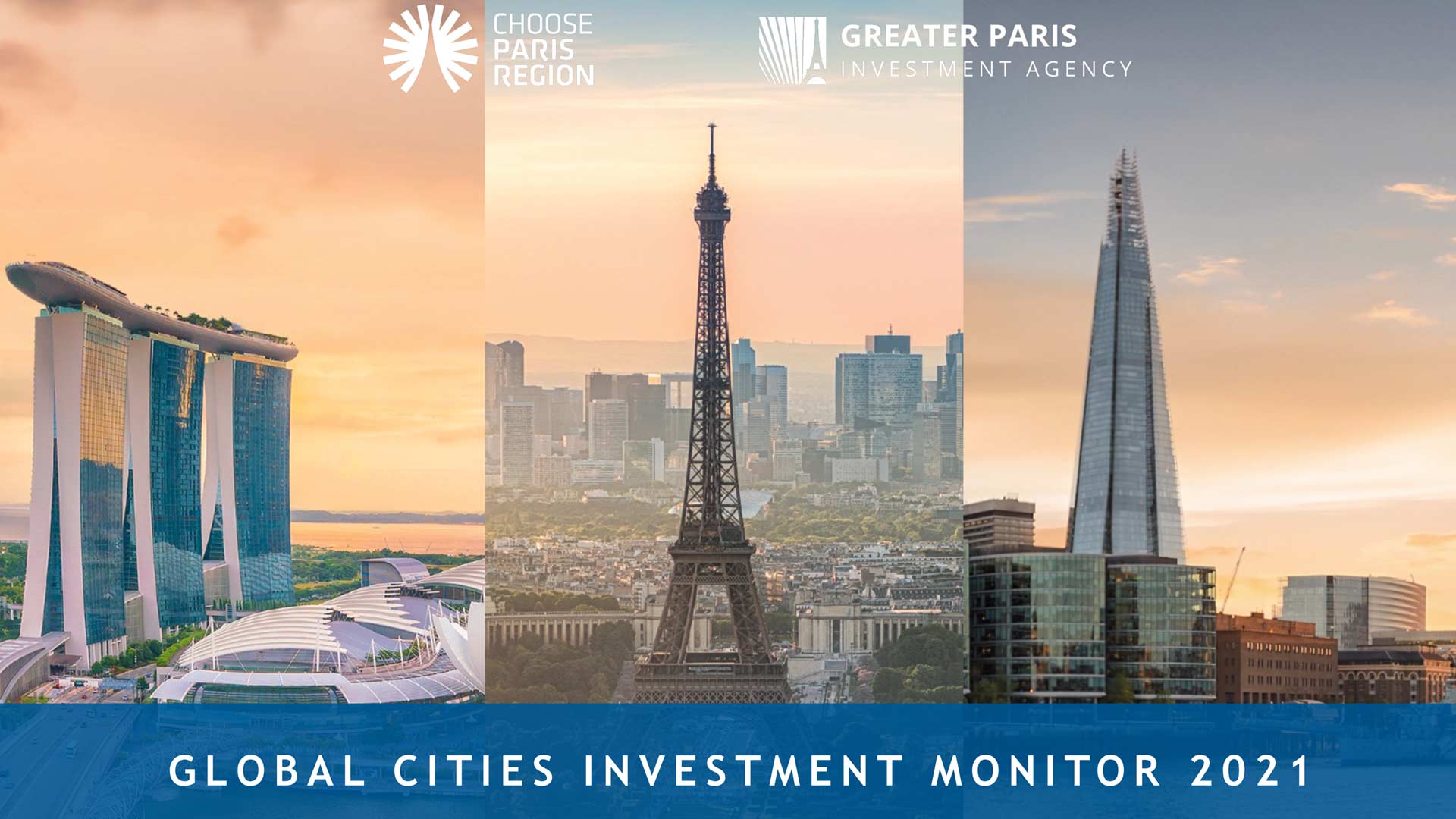 The Global Cities Investment Monitor is a barometer measuring the level of international investments in global cities. For 13 years now the measurement has been conducted by the Greater Paris Investment Agency and Choose Paris Region using information collected by fDi Markets and a survey by OpinionWay. The results of the 2021 edition were presented at Choose Paris Region’s annual conference on Attractivity organized in partnership with Paris Region and the Greater Paris Metropolis (Métropole du Grand Paris)

2020 was a year marked by an overall global slowdown in international investments. Under these circumstances Europe proved its strong resilience by holding 49% of the total global investments – 3 points below the 2019 measurement.

A testament to the European dynamic, there are at least 8 European regions present in the “Top 15” most attractive global cities. Paris Region, for the second consecutive year, significantly gained momentum and now holds a Top 2 global ranking alongside London.

Methodology and Results of The Survey

Conducted in 20 countries by OpinionWay, the survey was commissioned by the Greater Paris Investment Agency and Choose Paris Region. The survey was completed by more than 500 international investors to take stock of their perceptions on global cities, anticipations, and own personal investment criteria.

The results are, for their part, based on total international investments issued in each country. To qualify, each city mentioned had to show a global economic influence and attractiveness that extended beyond the administrative/political domain.

Digital infrastructure, a crucial sector that only increased its status with the current sanitary crisis, proved itself an important factor for companies when they consider expanding abroad. Political stability, judicial security, the availability of qualified personnel, and logistical infrastructure were equally crucial factors when putting together the rankings. Conversely, sectors such as quality of life and innovation had less of an impact on the rankings than in previous years.

Investments levels were recorded by the fDi Markets database which lists the published projects spanning 188,000 sources since 2003. Only investment projects considered new “greenfield”, or extensions were considered. Participation or joint-venture investments, however, were not used.

Leading the Way in Life Sciences and Financial Services

The sanitary crisis showed the importance of the Life Sciences sector – a strategic area where Paris Region leads ahead of other major cities such as Boston and London, thanks to world renowned research centers and R&D laboratories such as Saclay, Biocitech, and Genopole.

According to the study, Paris Region also ranks No.1 in Europe for the number of companies in the pharmaceutical sector and No.2 in the medical device industry.

The Hospitals of Paris, better known as the Assistance-Publique Hopitaux de Paris (AP-HP) are ranked No.1 in clinical research in Europe thanks to its 4,500 in-process trials and renowned research with major public institutions such as the Institut Pasteur, INSERM (National Institute of Health and Medical Research), and the Institut Curie. In 2017, the Belgium based Biotechnology company Galapagos installed a major portion of its research and development team in Paris Region. Similarly, Boston based Biogen will invest 22 million euros in France and recruit 45 additional employees to increase the strength of its global innovation center based in Paris Region.

In 2021, Paris Region also ranked as the No.1 destination in Europe for financial services passing Frankfurt, Dublin, Amsterdam, and London. Announcements by major banking institutions such as JP Morgan and Goldman Sachs highlighted the confidence held by international investors in Paris Region.

The Center of European Innovation

Just like in 2018, Paris Region retains a strong position in the field of Research and Development. Paris Region accounts for 20% of the research based in France and based on the Opinion Way barometer, upholds the criteria of having quality higher-education research and readily available qualified personnel.

According to the European Patent Office (EPO) France is the 2nd main producer of patents in Europe and the 5th worldwide. Published at the end of September 2021, the Global Innovation Index 2021 by the World Intellectual Property Organization (WIPO) similarly confirms France’s standing as one of the most innovative nations in the world.

A Region Moving Forward and Fast

The survey on global city perception found that Paris Region is continuing its ascension which started in 2020. It is expected that Paris region will improve its level of attractiveness consistently for three years – a rare feat amidst a global sanitary crisis. This ascension can be traced to Paris Region having the 2nd best global city response to the sanitary crisis.